So, ACEN 2014 is over. I only really took these two pics, of Yuji and Chance – sorta dressed as Pinkie Pie and Rainbow Dash – in a Tardis. 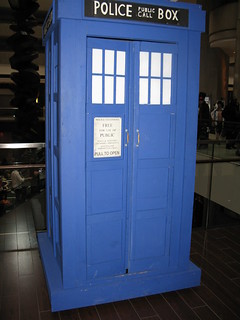 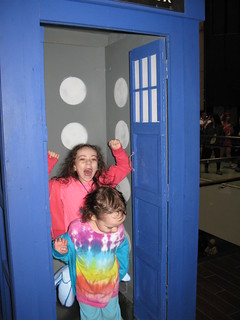 One day we went as the Apple family – with Yuji, my brother and myself reprising our roles as Apple Bloom, Big Mac and Apple Jack. This time we added Chance as Smarty Pants. I didn’t get a picture of him in the full outfit, but here he is trying on his hat.

I did not make it to the Angela concert which left me slightly bummed. However it was made up for when I went to the Wake Up, Girls! “panel.” I thought we were going to watch the film and then the seiyuu were going to talk, answer questions, that sort of thing. Before we went into the room we were told “no flash photography, no video… and absolutely no panty shots are allowed” which I thought was half a joke or maybe meaning no putting your camera down to below-skirt level. But we went in, watched the movie, and then… the seiyuu recreated the performance. Dressed in school uniforms, and yes, complete with this part.

This is why I love you, Japan.

Of course, no one listened to the “no panty shots” rule.

My brother – who was staying with me for the duration of ACEN, since I live closer – requested this Charmander laying down.

It’s a really quick/simple version, and I made it on Saturday after going home for the night. In order to keep it quick/simple there’s no details on the feet nor tummy, and no needle felting. It has safety eyes – and no, they are not derpy, the white specks are actual shine/reflection of the light. (I just found that amusing because they look so… purposely put there). I think using oval eyes instead of round really makes it a Charmander, but those large oval eyes have to be ordered online, and including shipping they work out to 0.74 – $1.40 a pair (depending on how much I buy at once). So I’m not sure which is better, using those or going through the work of needle-felting the eyes.

Anyway, we had fun this weekend, but other than the musical guests, I’m thinking ACEN may not be worth it for me anymore. Every panel I was interested in happened to be run by people I’d met at Ramencon last year. Everything we were interested in in the Artist Alley was either people that will be at Ramencon this year or people that I already knew of online (who have online stores). I spent all my money on gas, parking, tolls, and food, and had nothing left to even spend in the Artist Alley – though Yuji & Chance made out like bandits (even Chance who only had $15. He got a $10 “mystery bag” that included a hat, a small plush and a bunch of buttons, and a $1 egg with a button inside. While these were just a smart way of getting rid of merchandise with imperfections, Chance was delighted. He loves blind bags, so that was like a dream come true for him. He also got a small $4 plush from someone else.). With Yuji and Chance being the ages they are, riding the trains doesn’t really save me money vs driving there anymore. No one wants to split a hotel room with kids – and I can’t afford one on my own. Every time I’ve stayed in a hotel for acen it’s been split with like 5 other people.

I’m not saying ACEN is bad or anything, just that it isn’t worth it to me, at this point in my life, to attend. If I were selling in the artist alley that would be different, and I’m glad I took this year to kind of re-scope it out (and determine things like; if I were doing the artist alley, I’d have to split a room, because it would be idiotic to try to drive there with a time limit – since traffic is so unpredictable – and back after a long day of selling).

Ahh well. I look forward to the day when Yuji is old enough to work a table, and earn enough from selling her art to split a room. Then we’ll be able to switch off, with one of us working the table while the other goes to panels 🙂