About 6 weeks ago Chance found out about Lego KidsFest Indianapolis and asked if we could go. I said that he would have to pay for his own ticket and food and part of the gas, as well as any spending money, and that I would have to give him an advance in his allowance for him to be able to afford it. I expected that not being able to buy anything for 8 weeks would put him off immediately, but to my surprise both he and Yuji powered through and yesterday we went.

The drive was much more emotionally taxing than I thought it would be. This is the first time I’ve driven to Indianapolis with me driving the whole time – I’ve gone before of course, but with someone to trade off driving. But this time it was just Chance, Yuji, my brother (who can’t/doesn’t drive) and me. I have driven to Fowler Ridge Wind Farm before with this crew – so it should be no biggie, right?

Well, I should have looked at how much further Indianapolis actually is; Fowler Ridge Wind Farm isn’t even halfway there. And the wind farm, however briefly it is seen, is the only thing to break up the monotony. Other than that, it’s over two hours of stuff that looks so similar, that after stopping for gas my brother actually asked me if I was sure I was going the right way or if I’d accidently turned around.

But really the only problem with the drive was that it was painfully boring. The whole time, traffic moved at a good and steady pace. There was some construction going on, but that didn’t slow things down much. People for the most part drove politely and, well, not like idiots. It’s a definite contrast from driving in Illinois. It’s not a trip I’d want to make both ways in the same day for anything that engages ME more than this did – I’d definitely be getting a hotel room if I were attending a convention.

Anyway, I managed to not die of boredom and arrived at the Indiana Convention Center. This was my first time going and I have to say, it is great. It’s big and clean (which should go without saying, but I have been to some janky convention centers). There’s a parking garage right across from the main convention center doors. When you exit the parking garage on foot, you’re above the car entrance/exit. You just cross the street to get in to the convention center. This meant we weren’t outside for long, which made it convenient to leave our coats in the car (though they did have a place at the fest to hang coats!) and would be great if it was raining/snowing/etc. or just colder than it was. Which happens a LOT when I go to conventions (so we’re usually left with the choice of freeze and/or get wet as we walk a block, or carry around a coat/umbrella/etc. all day. And when it’s time to leave I usually end up leaving the kids somewhere at a door, going to get the car, and then figuring out how to drive back to the door so that they don’t have to walk through the snow/rain/cold again. None of those issues would be had at the Indiana Convention Center!)

Something else that struck me, was that my kids could REACH THE BATHROOM FIXTURES! Now I don’t know if this is something that happens all across the convention center, or if they chose those halls because that was the case (kids could reach the figures in THOSE bathrooms). But, either way, that was awesome. The number of public restrooms where kids can’t reach the fixtures is appalling. I think the goal is to have less people send their kids to the bathroom unattended (which is f’ed up but let’s not get into that) but what about adults in wheelchairs, little people, etc. who would be trying to work from the height of a child? Anyway…

They even have a breastfeeding area! I don’t breastfeed anymore obviously, but I sure could have used that back when I was – not because I’m embarrassed to whip it out at conventions (because that’s what I did) but because it would have been nice to sit down while I did it. But… the breastfeeding area is in a bathroom. Facepalm.

One thing to note; I don’t know if this is the convention center’s policy, or the fest’s policy, or what. And I wasn’t aware of this until I got right up to the door into the halls of the fest – it wasn’t on the website or anything, and the sign wasn’t visible until you got right up there, after you had paid for your ticket and taken off your coat. Rather shady imo, so I figured I’d make others aware; When I approached the doors, there was a sign that said no outside food/drink was allowed and that all bags would be searched. Sure, no outside food/drink is pretty standard at convention centers, but searching all bags? I usually carry around granola bars or some such, and duck outside or somesuch to eat them. Fortunately, I had left them in my car, since the car was so close. But if you can’t eat convention food and can’t go the whole session without eating, it’s something to think about. (There WERE handstamps that allowed you to go in/out, I’m just saying it’s something to think about.)

Wow, all that and I haven’t even gotten to the fest itself yet! Okay, I have three gripes about the Lego KidsFest;

1. It was crowded. Very crowded. I know they do crowd control by limiting the amount of people that can sign up for each session, but I also know that they reached those limits and in my opinion, this was small enough that the numbers should have been lower. I think many families stay longer than the organizers expect – like they don’t expect many people to stay the entire session, but a lot do. Sure, kids have short attention spans, and the hours are strategically placed so that kids are getting hungry an hour or two before the end (so they either go for the overpriced convention food, or they leave) but I think they are underestimating kids’ ability to get completely consumed for hours playing with lego.

2. There were strollers EVERYWHERE. And in retrospect, I should have expected that. But, personally, I find it rude to bring strollers to crowded places (infants go in slings, anyone who can walk walks. That’s s0nicfreak’s rule.) and I guess I keep subconsciously hoping everyone else has realized/decided the same. Strollers are like bikes in my opinion – they’re fine for GETTING places, but once you get there, you leave them chained to the bike rack with a bike lock (okay, I guess I am the only person I’ve ever seen do that with a stroller). There’s nothing that can be done about this I guess; there’d be damn near a war if strollers were banned from the fests.

3. There were no cheap items to get as souvenirs. I hoped everyone could pick up a minifigure or blind bag or something , but the marketplace had only expensive sets. Tshirts were $15 each, too rich for our blood. Even the drawstring bags with a lego picture on them – you know, the sort of bags that are often given away for free at this sort of thing? – $15 – $25. The only companies giving out promotional items were non-lego-related companies. And while I understand that Lego doesn’t NEED to give out promo items like that, I would have PAID for some lego buttons, stickers, pencils, small notebooks etc. (Guess I’ll be making them myself.) I don’t expect that most parents were forking over a lot of money, this close to christmas, with their kids right there. My kids did add several things to their xmas wishlists, though :\

Other than those things, the fest was pretty good. Good enough that I’m not mad about making the drive. The first thing we saw were the… what do you even call these? Giant lego statues? 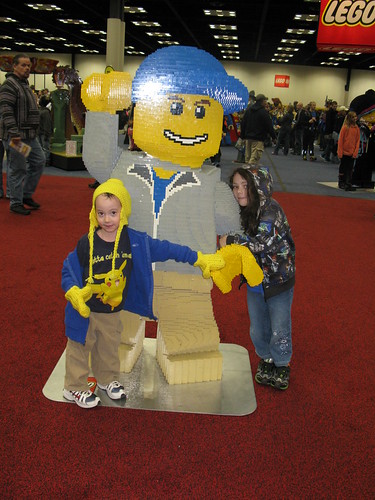 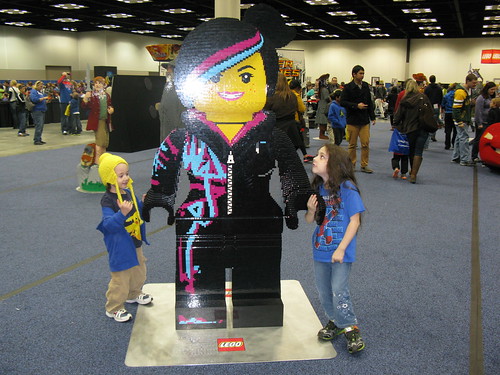 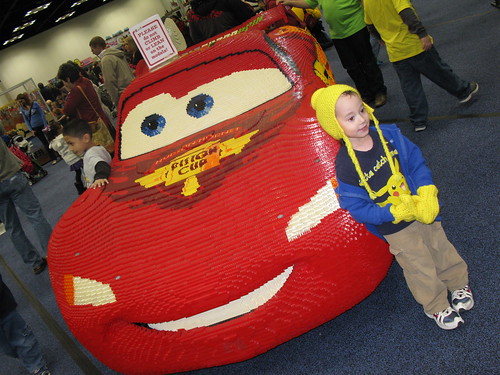 We only got pics with a few, since it was so crowded. There were a LOT more, all equally amazing. Chance, being a huge fan of Disney’s Cars. is over the moon about that last picture. He’s a LEGO MAN WITH A LEGO CAR!!!! ZOMGBBQ11!! And while I’m not as taken by the novelty of THAT aspect, I’m always fascinated by these things.

Next we headed to the “lego pile” – basically, a ballpit with lego instead of balls. Chance had the time of his life walking around in this and burying other kids. It’s definitely an experience that will never be replicated at home… no matter how much Chance wishes it would be. 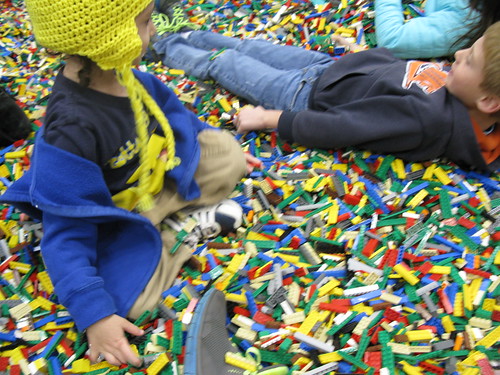 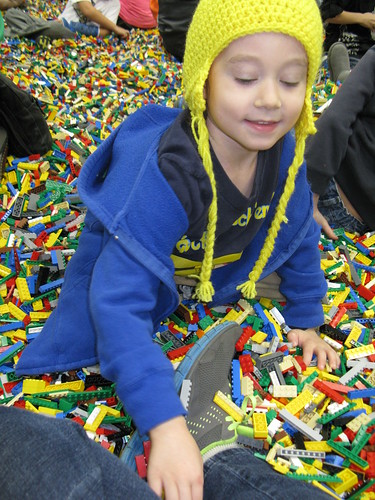 After that we walked around awhile, and opted to not participate in any of the contests, as they all had long lines. Eventually we started to build in the Lego “Friends” area. We probably spent an hour here alone, building with all the special pieces we don’t have at home. Yuji built a fishing dock, and made a girl go fishing in a row boat. Chance built a magical castle with an enchanted key and a magical treasure (a hairbrush in a treasure chest) and spent a lot of time decorating the inside. (Ironic, if you’ve been listening to how Lego says girls play vs how boys play the past few years…) 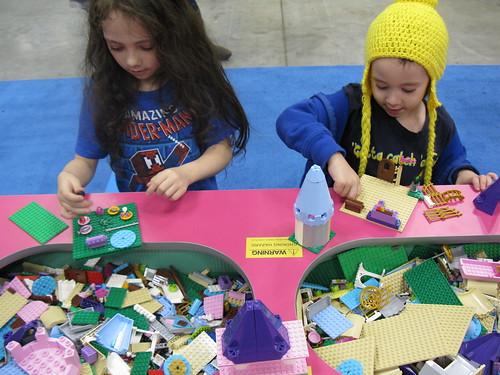 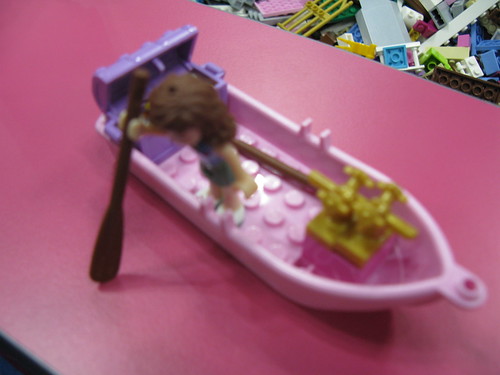 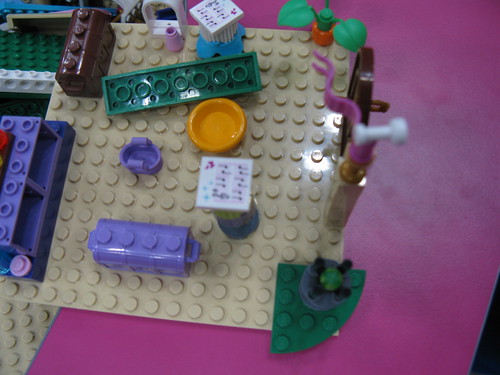 The kids had a lot of fun. It was definitely a KIDS fest, and geared towards non-nerdy families at that (quite honestly, it seemed like it was for families where the parents are oblivious and normally ignore their kids’ passion for legos). I feel they are missing a lot of opportunities by gearing it so much towards kids and then not selling some low priced items so the kids could buy some stuff themselves. Especially with the ticket prices ($20 per person age 3 – 17, $22 for adults). I don’t even want to add up how much we spent going to this thing (like I said, everyone going with me paid for themselves, but if I were the type to pay for it all myself it would not have been worth it). There was nothing new that we weren’t already aware of, and the new things coming out that I would have loved to see in person before release weren’t there (like, I don’t know. the new Minecraft sets releasing next weekend?). And heck the place was so small that you couldn’t even leave the kids to play in one area with one parent while the other parent goes to buy expensive sets and whisk them away to the car for Christmas. Indianapolis is the only one that is close to Christmas, but still, missed opportunities…

But, I’m really glad I got to make this drive for the first time for THIS, so that I know not to try to drive back in the same day if I go to something bigger/longer/more exhausting.

Will I go next year? Most likely not. It was worth attending once, but next year I’m leaning more toward Brickworld Chicago – it’s closer to home, in June, and seems to be more my speed (with booths for things that are actually, you know, related to Lego, crazy as it is?).